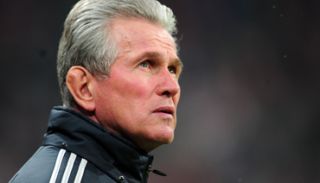 The 68-year-old, who won the Champions League with Real Madrid in 1998 and had a long playing and coaching career at Gladbach, will make way for Pep Guardiola after the end of the season following two years in charge at Bayern.

"Saturday will be my last Bundesliga game as a coach," Heynckes, who coached Bayern in three stints in his career, told reporters.

"What will happen after that, we will have to wait until after our two finals. I will probably say something in June after the German Cup final."

His team have clinched the Bundesliga title and could win an unprecedented treble of titles for a German club with the Champions League final against Borussia Dortmund on May 25 and the German Cup final on June 1 still to come.

Heynckes, who has coached teams in 641 Bundesliga matches, second only to Otto Rehhagel, hinted he could even call it quits after the season.

"If I was 15 years younger I would seriously think about a job abroad but I am not the youngest any more and clubs want to do a generation change and you cannot really do it with a 68-year-old."