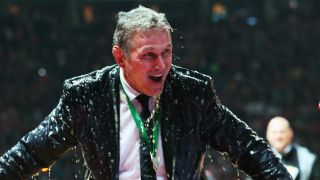 Jupp Heynckes is hoping he can avoid Bayern Munich's traditional beer shower on his Bundesliga farewell.

The veteran coach will lead Bayern in a league game for the final time on Saturday, with the champions welcoming Stuttgart to the Allianz Arena.

Heynckes, who will be replaced by Eintracht Frankfurt coach Niko Kovac at the end of the season, has won four Bundesliga titles at Bayern.

But the 73-year-old wants to stay dry when Bayern's players roll out their beer shower celebration at the end of the Stuttgart match.

"Bayern know how to celebrate on a big scale," Heynckes told reporters on Friday. "But I could do without the beer shower.

"It has been a wonderful time with a great group and a very good team. But I'm also looking forward to returning to anonymity.

"It was a pleasure to come to [Bayern training ground] Sabener Street every day because the atmosphere is just so good. Not just within the team, but also among the coaching staff. I don't think that's always a given.

"When you take on a job like this, you don't think about where you stand at the end of the season. In the moment, all you think about is: 'How can I get my team back on track?' I'm happy with my job here."

Heynckes' final match in charge of Bayern will be the DFB-Pokal final, against Kovac's Frankfurt, on May 19.