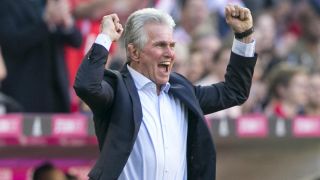 Bayern Munich manager Jupp Heynckes stressed the importance of player-coach relations after starting his fourth stint in charge with a 5-0 rout of Freiburg.

The two-time Champions League winner picked up from where he left off in 2013 as the Bundesliga giants cruised to their first win in four competitive fixtures.

An own goal from Freiburg captain Julian Schuster and Kingsley Coman's first of the season set the hosts on their way, before Thiago Alcantara, Robert Lewandowski and Joshua Kimmich made it a thrashing after half-time.

And, having been warmly welcomed back to the Allianz Arena, Heynckes acknowledged the need to avoid the kind of dressing-room fractions which reportedly contributed to Carlo Ancelotti's downfall.

"A coach must be at one with his players," the 72-year-old said at his post-match news conference.

"I want to continue working with the team so we can continue to improve on many things.

"[The win] is a positive start after a tricky week."

Thomas Muller was one of several players who voiced his frustration under Ancelotti after regularly finding himself out of the starting XI.

But the World Cup winner, wearing the armband in Manuel Neuer's absence, looked back to his influential best on Saturday as he helped force Bayern's early opener.

"The coach change is important but it is up to us players to improve our performances," the midfielder told Sky Sport Germany.

"There is no perfect game in football but today was close. We wanted to put on a great performance in front of our fans.

"We will keep our feet on the ground and prepare for the next game."