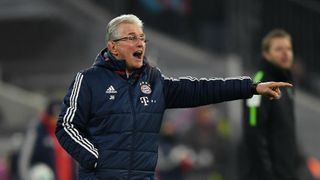 Jupp Heynckes is relishing the challenge of going up against Julian Nagelsmann when Bayern Munich host Hoffenheim in the Bundesliga this weekend.

Nagelsmann is the youngest coach in Germany's top flight and has been touted as a future Bayern boss after impressing since taking over from Huub Stevens at Hoffenheim in February 2016.

The 30-year-old guided the Sinsheim side to safety in the 2016-17 campaign and led them to a top-four place last term, securing Champions League football.

This season they sit ninth after three wins in their last 13 league matches, but remaining four points off second means Nagelsmann's growing reputation has not been affected.

Heynckes, the oldest coach in the Bundesliga, continues to be impressed by this weekend's adversary and knows Hoffenheim will pose a big threat to his team as they seemingly march towards another Bundesliga title.

"Hoffenheim have been doing a lot in the last two years and it's going to be a thrilling match as two strong sides meet," Heynckes told his pre-match media conference.

: "Julian Nagelsmann is a very good and inquisitive coach. There are ups and downs in any career. I did not start my coaching career with Mönchengladbach until I was 34. I think in that situation it depends on how the team reacts." January 26, 2018

"We are the favourites but in this league there are only good teams which is why every game is difficult.

"Julian Nagelsmann has given the team a different character, he has implemented structures and game plans.

"He has a very good concept, a very good game plan, every player knows what he has to do and what to do. But we are well prepared and have analysed the opponents.

"We have to keep up the pressure, maintain the quality of the team and try to improve it, [as well as the league] we have big goals in the DFB-Pokal and the Champions League, which the players know."