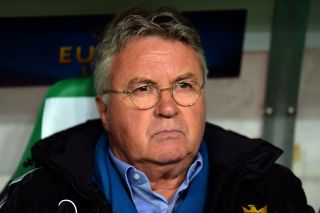 The Socceroos are searching for a new boss after parting ways with previous incumbent Holger Osieck, with the FIFA World Cup just eight months away.

Osieck paid the price for a poor run of form, which has included back-to-back 6-0 drubbings against Brazil and France respectively.

That has led to the possibility of a return to the post for Dutchman Hiddink, who guided Australia to their best ever finish at a World Cup when they reached the second round in Germany in 2006.

Their progress was only curtailed by a controversial injury-time penalty from Francesco Totti in a 1-0 defeat to eventual champions Italy.

And David Gallop confirmed Hiddink is being considered for the vacant post.

Speaking to FOX Sports, Gallop said: "There's often conversations and it's fair to say some feelers have been put out. Nothing more than that at this stage."

Hiddink has been out of work since leaving Russian Premier League outfit Anzhi Makhachkala in July.

The 66-year-old has had a glittering managerial career including lifting the Eredivisie title on six occasions with PSV and winning the FA Cup with Premier League outfit Chelsea.