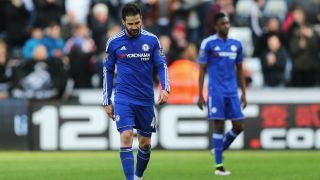 Guus Hiddink warned the Chelsea players that they are all auditioning for places in Antonio Conte's team next season.

Conte will arrive at Stamford Bridge once his national team duties with Italy end after Euro 2016, and Hiddink said the whole squad should be on notice after Saturday's 1-0 loss to Swansea.

Chelsea's reign as Premier League champions will officially end next month and the performance served up by Hiddink's side shows how far Conte will have to climb to reach the summit again.

"It is a clean slate, everyone has to fight for his position with the new manager coming in of course," Hiddink said.

"There is that, but when you play at Chelsea you must always be proud and play with internal motivation.

"If you play only with external motivation, worrying about material things or your position, you are slipping away.

"The intrinsic motivation is a condition that has to be there if you are to say a player is suitable for a big club.

"I said after beating Villa we will see what the players can do in bigger games. This was a bigger game because of the importance to Swansea."

The loss against Swansea left Chelsea in 10th place in the Premier League ladder with five games to go in their season, leaving them nine points out of the European places.