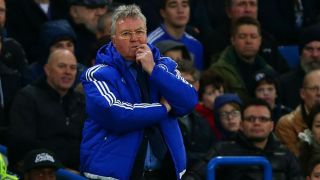 Guus Hiddink believes his Chelsea squad are united as he attempts to bring stability back to an embattled club reportedly beset by player unrest this season.

Speculation was rife that Jose Mourinho lost key sections of the Stamford Bridge dressing room following a poor start to the campaign, the Portuguese departing last month with Chelsea one point above the Premier League relegation zone.

Hiddink has drawn his first two games back in charge since succeeding Mourinho – the reigning English champions held against Watford and Manchester United – and the Dutchman is complementary about the work ethic of the players he inherited.

Speaking ahead of Chelsea's clash with Crystal Palace on Sunday, Hiddink told Sky Sports: "They are fully committed to their job.

"I like to observe, see how players act, how they are related, how they cope together.

"From there you can smell easily where problems might be, and so far I haven't found them.

"I don't know how it was before. After the beautiful championship last year there was a fall down. What I like to see is players who are very committed.

"I have to emphasise that this team has the same commitment after a week as they had in the past.

"You have your players who are leaders, and I feel these players can be even more tactical leaders during a game. We are emphasising this responsibility."