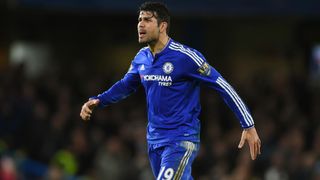 Interim Chelsea manager Guus Hiddink told Diego Costa not to change his aggressive style, saying he preferred his striker to be passionate.

Spain international Costa is certain to be at the centre of the action again when Chelsea visit rivals Arsenal on Sunday.

The 27-year-old was banned for three matches for violent conduct after the previous clash between the teams in September.

But Hiddink said he wanted Costa to stay passionate and hungry, while also lauding the goalscorer for his attitude off the pitch.

"I'd prefer to have players who, sometimes, you have to control or tell them 'a little bit less' than have to push them," he said.

"Sometimes you are misjudged by images. Off the pitch, they seem to be the most vulnerable figures. He shows a lot of joy to everyone.

"I observe the players when they are in the canteen, dealing with people who prepare the pitches, not snobby or arrogant - that's good to see.

"They're different characters off the pitch. On the pitch they have that desperate will to win, almost at any cost. That's a slight change in character and behaviour."

Costa has scored seven Premier League goals this season as Chelsea sit 14th in the table after 22 games.

Hiddink said a win over their table-topping rivals could be a platform for the remainder of the campaign.

"This club is used to thinking about being top three or four in England," the Dutchman said.

"Winning these games might bring confidence to the club and the team to ask, ‘hey, where do we belong?’ And think about why this team has fallen so deeply in the recent period."