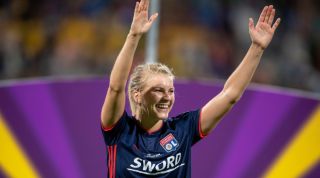 Women’s football may be taking enormous strides in terms of popularity and finances – but even the highest paid female footballers are far behind their male counterparts when it comes to wages.

The top five highest paid women footballers has been revealed by France Football magazine – along with male footballers and managers – and the list reveals how large the pay gap still remains.

Ada Hederberg, holder of the Women’s Ballon d’Or, tops the list with an annual income of around £343,000. Lionel Messi, the highest paid men’s footballer, gets around £112 million a year – roughly 326 times what Hegerberg is paid.

Three of the five top paid women play for Lyon, the French team who are current women’s Champions League holders and face Chelsea in the semi-finals of this season’s competition.

While England go into this summer’s World Cup in France as one of the favourites, no British players make the top five. This is the first season that the Women's Super League in England has been full-time and fully professional, and it recently announced a three-year sponsorship deal with Barclays worth £10 million.

This month has also seen the world record broken for attendance of a women's football match, when over 60,000 turned out to see Atletico Madrid take on Barcelona – and England boss Phil Neville has encouraged big English clubs to open their stadiums to women's sides in the hope that similar figures could be reached.

Here are the top five highest paid women’s footballers, and their annual income:

NEW The 20 highest-paid footballers in the world have been revealed – but is Messi or Ronaldo top?