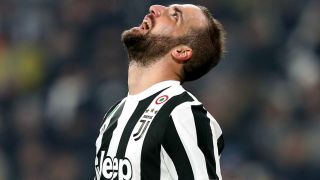 Gonzalo Higuain has been left out of the Juventus squad for Wednesday's Coppa Italia semi-final second leg against Atalanta.

The striker suffered a suspected ankle injury in the early exchanges of the 1-0 derby win over Torino on February 18 and was taken off just 16 minutes in.

Head coach Massimiliano Allegri had hoped to have the Argentina international, who scored the only goal in the first leg of the Coppa clash in Bergamo, on the bench at the Allianz Stadium.

However, Juve confirmed on Tuesday Higuain is still suffering from pain and will therefore not be risked. Federico Bernardeschi, Juan Cuadrado and Mattia De Sciglio are also absent, as expected.

Mario Mandzukic or Paulo Dybala are therefore likely to lead the attack against Gian Piero Gasperini's side.