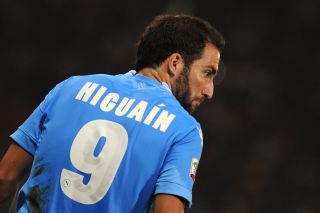 Rafael Benitez's men take on leaders Roma next Friday, with both sides unbeaten in the Italian top flight this season.

However, champions Juventus are also yet to lose a game in the league, and Higuain believes there are plenty of twists and turns to come during the season.

"It is too early to talk about it. For us, we will not think about it until 72 hours beforehand," Higuain said of the game at the Stadio Olimpico.

"It is indisputable that it will be an important game, capable of sending an additional signal, but nothing more, it is no final.

"The season is very long, there is no eventuality that will change my mind, whatever happens."

The Argentina international has scored three times in Serie A this season since joining from Real Madrid in July.

He confirmed his desire to concentrate on making further improvements as a player.

"Are Juventus stronger in the title race? We cannot even say we are at the end of the first half of the season and in a title race complicated things can happen," he continued.

"We need to at least wait until the end of the first half of fixtures to sense the true forces and then even that may not be enough.

"But anyway, I am generally not accustomed to the interest of others, I am thinking about my team, to improve, to grow through training.

"I do not have a tendency to mind other people’s business, but it is indisputable that the champions of Italy do not lack class players."