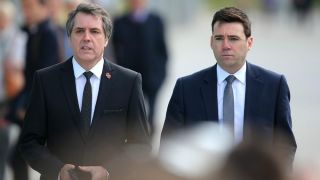 Shadow home secretary Andy Burnham has welcomed the Hillsborough verdict and the end to "the greatest miscarriage of justice of our time".

A jury concluded by majority decision that the 96 individuals who were fatally injured in the disaster in 1989 were unlawfully killed and were not themselves to blame in any way for the tragedy.

The Crown Prosecution Service later confirmed that it will formally consider whether any criminal charges must now be brought against individuals and organisations deemed responsible for the disaster.

And Burnham, who has been steadfast in his support for the families campaigning for justice, has called for prosecutions after the inquest's verdict.

"This has been the greatest miscarriage of justice of our times. But, finally, it is over," he said in a statement. "After 27 long years, this is real justice for the 96, their families and all Liverpool supporters. The survivors of this tragedy can finally be remembered for what they were on that day – the heroes of Hillsborough who tried to help their fellow fans.

"The Hillsborough Independent Panel gave us the truth. This Inquest has delivered justice. Next must come accountability. For 27 years, this police force has consistently put protecting itself above protecting those hurt by the horror of Hillsborough. People must be held to account for their actions and prosecutions must now follow.

"Disgracefully, lawyers for retired police have attempted to continue the cover-up in this courtroom. They made it an adversarial battle in defiance of the Lord Chief Justice's ruling. This has been brutal on the Hillsborough families and put them through hell once again. The current leadership of South Yorkshire Police needs to explain why it went back on its 2012 apology at this Inquest, prolonging the agony for the families.

"The sense of relief we feel is tempered by the knowledge that this day has taken far too long in coming. The struggle for justice has taken too great a toll on too many. But the Hillsborough families have at long last prevailed and finally their loved-ones can rest in peace."

Steve Rotheram, MP for Liverpool Walton, added: "I have waited 27 years for this moment. But I know it comes too late for many. I was there on the day and saw the horror unfold before my very eyes.

"Before we'd even buried our dead, the hurt of loss was compounded by the lies and smears. I remember picking up a newspaper and feeling sick to the pit of my stomach. They inflicted terrible pain on a city at its moment of maximum grief.

"I've seen how friends have suffered. This is a momentous day but they should never have had to wait so long. The truth is out there for all to see. Justice has been served by the verdicts and now it is about accountability."