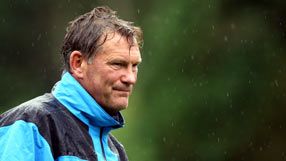 Clipboard in hand, the 53-year-old former England manager, who also played for his country and was one of the most gifted midfielders of his generation, alternates between jotting down notes, shouting orders and encouragement to the players and making critical comments to Nigel Spackman, an ex-Chelsea and Liverpool player who is one of his assistants.

"Shape again! Talk to him! Tucked in too far! That's poor! You worked hard to win it and you gave it straight back!" bellows Hoddle, who is clad in a light blue tracksuit top and black trousers and sporting sunglasses.

It is a typical scene at the Glenn Hoddle Academy (GHA), a professional development centre set up by the former Tottenham Hotspur and Chelsea boss to help young players who just missed out on a professional contract to get back into the game.

Now in its third year, the academy has some 30 mainly British recruits who have passed through trials and been offered a place in Jerez, where they live for free and get a small weekly allowance.

The training regime is rigorous and some of the most promising players regularly turn out for a local team, Jerez Industrial who compete in the fourth tier of Spanish soccer and which the academy essentially saved from collapse.

Sitting outside the resort hotel where the players and coaching staff live, Hoddle said the idea for the academy came to him in the early 1990s when he was manager of Chelsea.

He noticed that a lot of players in their late teens were being released and felt they had often been judged too early and deserved another chance.

"If you're good enough you get fast-tracked into first teams but there's another load of players that fall by the wayside that could be developed and get there in the end," Hoddle told Reuters, as groups of German and British golfers headed off for a day on the hotel course.

"I could see over the 10 years that I had been a manager that we didn't really develop and give the players enough time and we were losing a hell of a lot of talent through a great big hole that they never came back out of.

"So I thought, well, one day I might do something about that and see if I can redress the balance a little bit."

Hoddle put in some of his own money and also tapped the City of London for financing, attracting investors who he said were impressed with the concept and the experienced coaching staff including Spackman and other former top-level players and coaches such as Dave Beasant and Graham Rix.

"At the moment it wouldn't be paying for itself," Hoddle said. "But obviously what we're looking to do is get players back into football and we get development fees for them and then if they go on and make appearances and are sold on we would get percentages of that.

"That's going to take some time. But we're slowly growing. We've got over 2,500 players on our website now asking for places."

More than 60 countries have expressed an interest in opening similar development centres, although Hoddle said he preferred to take things slowly.