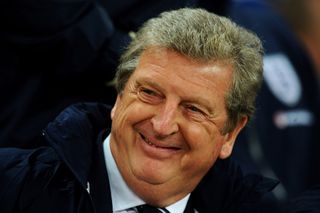 Goals from Wayne Rooney and Steven Gerrard ensured the hosts won 2-0 to secure top spot in Group H and a trip to Brazil next year.

And captain Gerrard calmed the nerves with a second goal two minutes from time to spark jubilant scenes - including England assistant manager Ray Lewington sprinting down the touchline - after Poland had their chances to spoil the party.

Hodgson reflected on a job well done and is confident England can make further strides before playing on the biggest stage of all in South America next year.

He told ITV Sport: "It's a great satisfaction, it was a tough group with a lot of difficult games because Poland, Montenegro and Ukraine proved tough opponents.

"I'm delighted for them, we played some good football in the first half and luckily Steven got the goal at the end, which gave Ray chance to show sprinting ability.

"We've been getting better all the time. One of our best performances was in our first game when we beat Montenegro 5-0 away and we have played some great stuff here.

"We always felt if we could get to these last two games and get some players back we would have a great chance."

Hodgson believes England are a more accomplished side than they were in the European Championship last year and he is sure that the best is yet to come.

He added: "I'd like to think we're a lot better, we've been working together 18 months. Hopefully we can get better in the months leading up to Brazil."