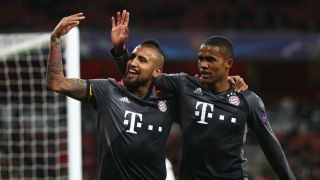 Bayern Munich president Uli Hoeness says the club will focus on developing youngsters rather than spend big on new signings in the coming years.

The Bundesliga leaders boast the financial might to blow many of their competitors in Germany out of the water in the transfer market and they have invested heavily in the playing squad in recent years.

Mats Hummels and Renato Sanches were signed last year for a reported outlay of close to €60million, although Sanches' deal alone could cost as much as €80m depending on bonuses.

Arturo Vidal, Douglas Costa, Mario Gotze and Medhi Benatia have also commanded significant transfer fees since 2013 and deals have already been put in place for Niklas Sule and Sebastian Rudy to join from Hoffenheim before next season.

But, although veterans Philipp Lahm and Xabi Alonso will need replacing before 2017-18 gets under way, Hoeness has told fans not to expect major transfers as he wants a team constructed primarily of players developed through the youth system.

"This will be a new chapter for FC Bayern, in which we will again try to reduce transfers by developing our own players," he told TZ. "And that doesn't look too bad at the moment.

"You mustn't forget that we have already bought a defensive player in Niklas Sule, who could have a great future.

"We've got Sebastian Rudy, who can play in midfield. In defence, we have Mats Hummels, Jerome Boateng and Sule in the future. Javi Martinez can also go into midfield."

Bayern defeated Eintracht Frankfurt 3-0 on Saturday to move 10 points clear at the top of the Bundesliga.