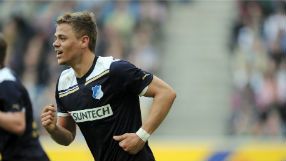 The 22-year-old German has been in a coma since his car collided with a truck last Friday. Hospital doctors say his condition remains critical although he has shown signs of stabilising.

Hoffenheim won their previous two matches before the accident and drew 0-0 against Augsburg last week in a game overshadowed by the previous day's car crash.

"We are sucking up every and any positive signal and we strengthen our hope," team manager Andreas Mueller told reporters.

Coach Markus Babbel, a former Bayern player, added: "Obviously the players feel the need to care for Boris and visit him but it makes no sense at the moment to go there as he needs absolute quiet".

Ninth-placed Hoffenheim face a tough task at Bayern who have won all six of their league games this season.

Bayern, bidding to equal a club record of seven straight victories at the start of a Bundesliga season, are looking to bounce back from their shock 3-1 defeat by Belarussian outsiders BATE Borisov in the Champions League on Tuesday.

The Bavarians have yet to drop a point at home against Saturday's opponents and last season's 7-1 demolition represented the heaviest Bundesliga defeat for Hoffenheim.

"It is important to show an instant reaction against Hoffenheim, to step on the gas so that our Bundesliga rivals see that Bayern may have lost but they have not been hurt by it," said chief executive Karl-Heinz Rummenigge.

Bayern were involved in an internal squabble in the week with sporting director Matthias Sammer saying the players needed to show more effort, a criticism rejected by coach Jupp Heynckes.

President Uli Hoeness spoke up in support of Sammer, saying the coach needed to accept his criticism.

"Sammer's comments were not unjustified, I think one should accept them. He is the coach's equal partner and he is absolutely entitled to do this," said Hoeness.