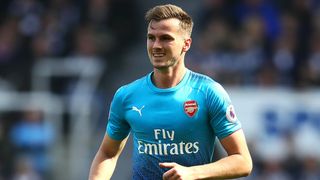 The extension comes despite the 22-year-old's struggles to break into the first team, having made just seven Premier League starts this term.

He has been a more regular figure in the run to the Europa League semi-finals, although Arsene Wenger overlooked the defender for last week's first-leg draw with Atletico Madrid.

Holding, who played 90 minutes in last year's FA Cup final triumph over Chelsea, has made 42 senior appearances in total since signing from Bolton in July 2016.

The Gunners did not confirm the exact length of the deal.

Delighted to have extended my contract with . Really looking forward to the exciting years ahead. Thank you for all the support from everyone! May 1, 2018