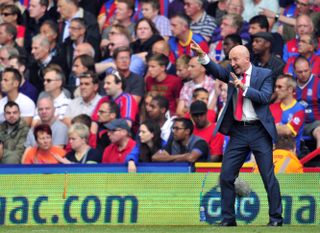 The Palace boss was incensed by two penalty decisions that went against his side in the Premier League clash at Selhurst Park on Sunday.

The 50-year-old suggested that smaller clubs were being unfairly treated by referees after first Stephen Dobbie was not awarded a spot-kick after going down in the box, before Dean Moxey was adjudged to have handled Aaron Lennon's cross - with Roberto Soldado stepping up to score and give Tottenham the win.

Holloway said: "I want a foul like anyone else would have got one (for the challenge on Dobbie). I've got a horrible taste in my mouth after that."

However, in a statement on their website the FA confirmed on Tuesday: "Following his side’s match against Tottenham Hotspur on Sunday 18 August 2013, Crystal Palace manager Ian Holloway has been charged by The FA in relation to two separate matters.

"Firstly, it is alleged that Holloway’s language and/or behaviour in or around the match officials changing room at the end of the game amounted to improper conduct.

Holloway has until August 23 to respond to the charges.