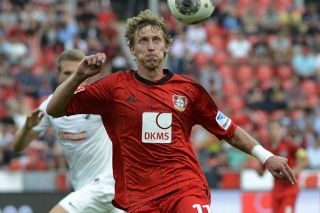 The striker helped his side return to the Champions League with 25 goals in last season's Bundesliga, more than any other player.

Leverkusen have won their last seven home matches in the group stages of Europe's premier club competition and will aim to extend that record against Shakhtar Donetsk of Ukraine on Wednesday.

"For me it's the greatest thing to play here at home. And then if you're playing a Champions League match, under floodlights, then we all look forward to it very much, the players and the fans.

"You can feel the great atmosphere from the beginning and that reflects onto the pitch. It doesn't matter where you are sitting, the atmosphere is always great."

Kiessling has already scored eight goals this season in 13 appearances, although his latest - which came in a 2-1 win at Hoffenheim - was highly controversial, with the ball entering the back of the net via a hole in the side netting.

Since crossing from Nuremberg in 2006, Kiessling has netted more than 100 strikes for Leverkusen, and although he has been regularly linked with moves elsewhere, the 29-year-old striker has no desire to leave the club.

"I feel very good here because I just know everybody here. It's a very familiar feeling, what I have here with the employees and the many fans I know personally," he said.

"This is very important for me and that makes me feel very good here."

Kiessling also sang the praises of coach Sami Hyypia, who after sharing duties with Sascha Lewandowski last term, has taken on the role solely this season.

And the striker feels the former Liverpool defender – who won the Champions League with the English giants – can bring success to Leverkusen.

"He's been doing a great job," he added.

"Last season there were two coaches and the job was split but now with him being the only head coach here - still having his assistant coaches of course – but now you can see that he's coming out of himself more.

"You can see that he is enjoying it and that he wants to achieve a lot with us."