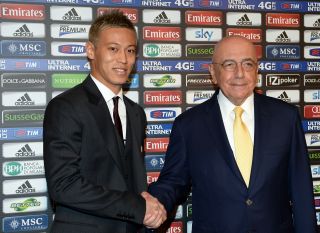 The Japan midfielder has joined the Serie A giants on a three-and-a-half year contract after his contract with CSKA Moscow expired.

Honda is not yet ready to make his first Milan start, as he has not featured since CSKA's Champions League defeat at Viktoria Plzen on December 10.

But the 27-year-old is relishing the prospect of making his debut for Massimiliano Allegri's side and given they are well off the pace in Serie A, Honda hopes they can pull off a surprise European success with Atletico Madrid their opponents in the round of 16 next month - although he will be ineligible.

Speaking at a press conference on Wednesday, he said: "I always said that I would play in the Serie A and wear the number 10 shirt.

"So I was desperate to come here and play and delighted about the interest in me and I want to thank (chief executive Adriano) Galliani and the club for this transfer.

"I want to show on the pitch what can I do. My career was destined to be here and I my heart was set on Milan.

"I really want to be a champion with AC Milan. I'm thinking about the Champions League.

"I haven't been playing for a month, I still need time before starting

"I understand there are high expectations and I've got to show what I'm capable of. I want to score many goals, assists – I'll do my best."

Playmaker Honda will be expected to provide some creativity alongside Kaka and he is looking forward to lining up alongside the Brazilian and Italy striker Mario Balotelli.

"Kaka and Balotelli are champions, I can learn a lot from them." he added.

He said: "Zaccheroni the coach of Japan advised me to come here, Milan are top side in Serie A, so I will give everything."