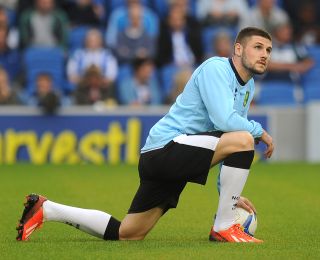 The former Celtic striker suffered a shin injury during the club's final pre-season friendly against Panathinaikos last Saturday and could now miss the fixture at Carrow Road.

However, manager Chris Hughton said the 25-year-old would be given every chance to prove his fitness.

"Gary Hooper is touch and go and we plan to give him right up until the last moment," explained Hughton, who will definitely be without captain Sebastien Bassong and winger Anthony Pilkington.

"Seb is back in training and took part in the midweek development game," Hughton continued.

"He came through that fine but he will just miss out, as will Anthony Pilkington who will start training again on Monday."

And the 54-year-old stated that while this was not ideal preparation for their Premier League campaign, such games are issues all clubs must cope with.

"We had two that played a full 90 minutes, but we were fortunate that some didn’t play as many," he said.

"It is always a difficult week with the international games. What you are able to do and the real preparation you want to do are affected by the ones who played so many minutes for their countries.

"That is something we have to cope with. It is no different to Everton who were in a similar position."

Hughton will also be unable to call on Dutch midfielder Leroy Fer, who is serving the last game of a suspension carried over from his time at former club at Twente.