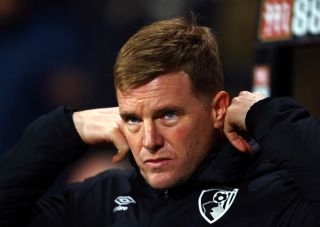 Eddie Howe saluted a huge win for Bournemouth and admitted he is “desperate” to keep them in the Premier League.

The Cherries eased some of the pressure on their manager with a crucial 3-1 victory over Brighton.

Bournemouth’s woeful recent form, 10 defeats from 12 matches, has raised questions about Howe’s future for the first time in his 11 years in the dugout.

But strikes from Harry Wilson and Callum Wilson, either side of a Pascal Gross own goal, secured a much-needed win to lift them to 18th, level on points with West Ham and safety.

It was a victory which also illustrated that the players are still playing for the manager who guided the club all the way up from League Two.

“It feels big at the moment but time will tell. We knew how big tonight was, in so many different ways,” said Howe.

“I’m really pleased but cautious at the same time to not build it up too much then go flat again. We really want to kick on from this point.

“A lot of clubs up and down the country maybe wouldn’t have been given the time and support we’ve had. We have to recognise that.

“I haven’t seen the table and I don’t really want to. It’s all in our hands, it’s all about us. If you don’t get wins, you’re going to get relegated.

“Tonight was a real positive but we have to try to win our next game. It’s been a difficult period but it’s what you’re in it for, the highs and the lows.

“Don’t get me wrong, you hate the lows. But we’re desperate to retain our Premier League status, desperate to stay here.”

The hosts recovered from a nervous start and were energised by Harry Wilson’s deflected 36th-minute strike.

Five minutes later Gross, under pressure from Callum Wilson on the goal line, turned a corner into his own net.

In the second half Callum Wilson rounded Ryan for his first goal since September.

Brighton belatedly began to threaten but Cherries keeper Aaron Ramsdale made three outstanding saves to deny Lewis Dunk, Neal Maupay and Aaron Mooy. The latter eventually pulled one back when his shot flew in off the far post, but Howe’s men held on.

It certainly appeared a good time to be playing Brighton, who have never won a Premier League match in January, or away from home on a Tuesday.

They are just two points above the drop zone and manager Graham Potter said: “We felt the home crowd were just about to turn on the home team, but then five minutes of a bit of madness from us means it’s 2-0.”

“Its going to be a long, torturous few days for me. We need to work, be honest, be together and help each other.

“I believe in the players. I believe in the group. But we’ve lost the game after a good first 35 minutes. We have to take that and understand it. Not panic, but we need to fight and do better.”