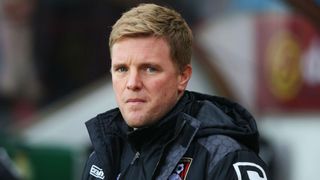 Eddie Howe praised Bournemouth's record signing Benik Afobe after the striker scored for the second successive game in a 1-1 Premier League draw at Sunderland, but the manager faces a nervous wait to discover the extent of an injury suffered by Junior Stanislas.

Afobe put Bournemouth into an early lead at the Stadium of Light on Saturday, converting a fine cross from Stanislas, but Patrick Van Aanholt struck back for Sunderland before half-time.

Lewis Grabban missed a great chance to earn all three points for Bournemouth, who have lost only twice in their last 11 league fixtures.

"I am very pleased with his performance today and to score again.

"We had great chances to win it. Good moments, but I don't think we were at our best in an attacking sense today.

"Second half I felt it was a more even game. We had the better chances, we just couldn't find the finish."

"He's quite sore but we will have to assess how he is later on," Howe said.

"Junior was brilliant today - he really showed his quality.

"It will be a big miss if he is out for any period of time."