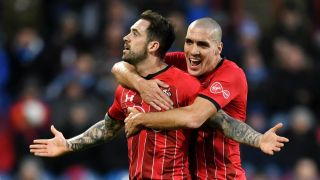 Ralph Hasenhuttl's resuscitation of Southampton gathered momentum as they climbed three points clear of the Premier League drop zone with a 3-1 win at Huddersfield Town.

The Saints led from the 15th minute through Nathan Redmond and navigated a nervy spell in the second half to deservedly prevail in a match with clear relegation implications.

Danny Ings, twice on target in last weekend's 3-2 victory over Arsenal, converted his side's second from the spot before half-time and it proved a decisive buffer.

Philip Billing's bamboozling of Alex McCarthy briefly offered the Terriers a lifeline in the 58th minute but, as is often the case, they failed to build on a positive period and were consigned to a fifth straight Premier League loss when teenager Michael Obafemi buried his first professional goal.

The confidence Southampton gained from overcoming Arsenal was evident in Redmond's emphatic finish for the opener, the winger punishing Terence Kongolo's ungainly attempt at cutting out Pierre-Emile Hojbjerg's pass.

28 - Nathan Redmond has scored his first Premier League goal of the season with his 28th shot. Persistence. December 22, 2018

Huddersfield were struggling to exert any kind of attacking threat and another defensive blunder cost them three minutes before the break.

Mathias Jorgensen miscontrolled Ings' wayward pass and compounded his error by tripping the Saints striker, who coolly sent Jonas Lossl the wrong way from the spot.

McCarthy made an instinctive save from Jorgensen's close-range header soon after the interval but the goalkeeper was far less impressive in allowing Billing's swerving shot to beat him.

That instigated a period of Huddersfield pressure that was relieved through a third mistake at the back.

Christopher Schindler was all too easily robbed of possession, Redmond selflessly squared and substitute Obafemi was on hand to tuck away a landmark goal, leaving the hapless hosts four points from safety.

What does it mean? Terriers in serious trouble

Still, that concern will fade to minor irritation for manager David Wagner in comparison to the headaches served up by his defence, who could have prevented each goal.

Hojbjerg at the heart of Saints' success

Southampton were blessed with several impressive performers and chief among them was Hojbjerg.

Wearing the captain's armband, the former Bayern Munich man was a real leader in midfield as he got through a power of defensive work while registering an assist for Redmond's opener.

A defender of Jorgensen's experience should have known better than to have been sucked into the challenge that allowed Ings to double the margin in the first half.

The mistake plunged Huddersfield into a hole they were unable to escape from, and losing more than half of his duels did little to help.

Huddersfield must contend with a daunting trip to Old Trafford on Boxing Day, while Southampton will eye a result at home to West Ham the following day.