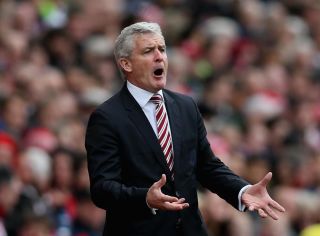 After racking up wins over Arsenal, West Ham, Hull City and Newcastle United at the Britannia Stadium, Stoke welcomed Tottenham to Staffordshire looking for a fifth maximum haul on home soil - something they have never achieved in the Premier League.

However, manager Hughes witnessed his side fall short in a 1-0 loss to Tottenham, Danny Rose scoring the only goal of the game in the 33rd minute.

Hughes felt his side were well worthy of reaching the milestone victory, but felt key decisions - including a red card for centre-back Ryan Shawcross - went against his  team.

"We put in a great performance and got no reward unfortunately," he said.

"That's a disappointment for us because if we had won today that would have been five wins on the trot at the Britannia and no other Stoke team has ever done that (in the Premier League).

"So that was something we were trying to achieve today, but circumstances went against us unfortunately."