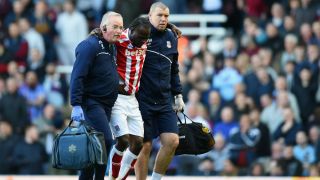 Hughes told the club's official website: "It may well be that Victor's season is over unfortunately because of the type of injury he has got. He might get back but at the moment we're probably thinking that he won't make it.

"It's a shame because Victor has done really well since he's been with us.

"He was our shining light in the early part of the season and then unfortunately he got a couple of quite serious injuries that held him back and in the end he hasn't been able to finish the season with us.

"He'll look back on his time with us and think he's made an impression and done well and we'd agree with that because he's been a really important figure for us this season."