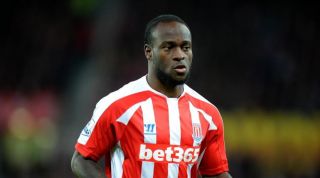 Stoke City boss Mark Hughes has not ruled out a close-season swoop for loanee Victor Moses after being impressed by the winger this season.

Moses played 19 games in the Premier League before a hamstring injury in April ended his campaign and saw him return to parent club Chelsea to recover.

However, such was the 24-year-old's impact at the Britannia Stadium, Hughes would be keen to see him back next season.

"Those are options you can pursue, because you can get good players in and not commit huge chunks of money," Hughes told the Stoke Sentinel.

"We've done okay ourselves with loans over the last couple of years.

"It was good to see Victor back at the ground for the final game of the season. I thought it was important he came, along with Bojan, because they have obviously played their part in our season as well as those on show for the last game.

"He's back at Chelsea now, but hopefully we can still do something. We'll have to see."

Stoke finished the campaign with a 6-1 demolition of Liverpool on Sunday, securing ninth place and a record haul of 54 points.