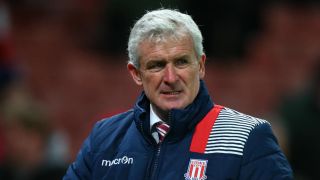 Stoke City manager Mark Hughes says Walter Mazzarri has apologised for refusing to shake hands after his side's 1-0 victory at Watford, but feels he may have been told to so do.

Mazzarri immediately walked down the tunnel after the full-time whistle, with Hughes sarcastically waving goodbye after being snubbed for a handshake.

The Stoke boss revealed his opposite number had approached him to say sorry after the match, but questioned the Italian's motives for doing so.

Speaking to Sky Sports, Hughes said: "I think he just forgot for a brief moment what we do over here.

"Win, lose or draw, you should always offer your hand. In fairness he came and apologised but I think he was told to."

Stoke's victory came courtesy of Heurelho Gomes' first-half own goal and extended an impressive run of form that has seen them lose just once in eight Premier League matches.

Hughes was impressed by how his players dealt with a team that consisted of five changes as he shuffled his pack due to injuries and suspensions.

"We were a little bit stretched in terms of personnel," he added. "We had to reorganise.

"I thought we worked really well and made it happen, I think that was the key. To a man they ran and made it work.

"I don't think Watford were expecting our shape and how comfortable we were in possession. We circulated the ball really well.

"In the first half I thought our football dominated and in the second we had to withstand some long balls.

"You can have a cunning plan but if the guys don't embrace it or don't think it is going to work then it isn't going to happen.

"It's a really satisfying win."