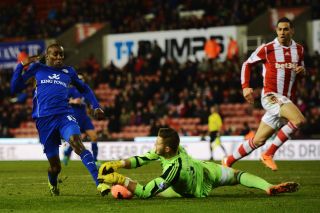 Goals from Kenwyne Jones and Charlie Adam secured Stoke's win, but it was the performance of goalkeeper Butland that drew the highest praise from manager Hughes.

The 20-year-old England international made his first start for the Premier League club with Asmir Begovic and Thomas Sorensen absent through injury, and made a couple of crucial late saves after Leicester's David Nugent had halved his side's deficit in the 77th minute.

"We scored two good goals, but then gave them a bit of encouragement with their goal and the last five or 10 minutes was a bit frenetic," Hughes said.

"I thought Jack stepped up to the mark in that period with two saves for us.

"He showed what everyone at the club and outside the club knows, that he's an outstanding young goalkeeper.

"I thought collectively we were good. We showed the opposition and the competition the right level of respect and I thought it was important to pick a recognised back four because Jack hasn't played too much with them and had the benefit of that because he will be in goal for the next couple of weeks, I would suggest."

Hughes was also pleased with the contribution of striker Jones, who registered his fifth goal in domestic cup competitions this season.

"I wanted to give Kenwyne a run-out," the Welshman added. "He's been very patient and hasn't played (in the league) because Peter Crouch has done very well.

"He acquitted himself well. He got a goal and could have had a couple more."