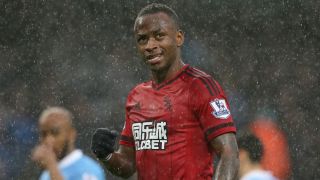 Stoke City boss Mark Hughes has promised that the club will sign players despite a lack of transfer activity so far.

The Premier League side pursued a bid for Nani before the Portugal international sealed a move to Valencia for a reported €8million fee.

Hughes has also reportedly reignited interest in West Brom striker Saido Berahino, although Tony Pulis' side are claimed to have offered the 22-year-old a new contract in a bid to ward off suitors.

But Hughes insists there is no reason for Stoke fans to panic over a quiet transfer window so far.

"We are working really hard and everybody obviously understands that it's difficult to get some deals over the line," he said, as quoted by the Stoke Sentinel.

"There's a lot of elements to come together, not least the players you want and their current club because they have to agree for them to leave.

"We can't really influence that, except to make offers for players, and then you have to wait for that to be accepted.

"There's a lot of players we are talking about and are just trying to get a few over the line. A lot of things can muddy the waters and we've just got to be patient.

"We will bring new players in, without a doubt."