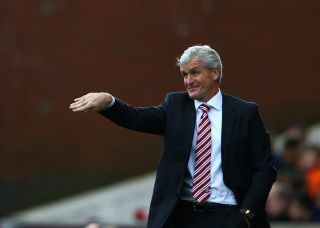 Stoke's last Wembley experience came in 2011 when they finished as FA Cup runners-up, but Hughes has visions of taking them there again in his first season in charge at the Britannia Stadium.

However, the Welshman is not prepared to risk playing his first-choice XI as he attempts to juggle league and cup campaigns.

"We will be strong on Tuesday," said Hughes. "I always pick strong sides for cup games.

"It's a competition that we want to progress in, so we will go to Birmingham and look to win the game, and secure a spot in the last eight.

"I will make changes - some will be enforced and others will be to give other players an opportunity - but there will be 11 players on the pitch who have the capabilities of hurting Birmingham and winning the game for us.

"I would love nothing more than to take Stoke to the final of the Capital One Cup. That was the aim at the start of the season, and remains the aim now that we are in the last 16.

"We have played well in the matches so far, and hopefully that will continue tomorrow.

"It's not an easy fixture for us, not by any stretch of the imagination, but as long as we approach it correctly, acquit ourselves well on the night then we can win the game for sure.

"We have good quality in the squad, but we also know that Birmingham will be no pushovers."

Robert Huth (ankle), Andy Wilkinson (knee) and Glenn Whelan are doubts for Stoke, but Marko Arnautovic (illness) is expected to be fit enough to feature.