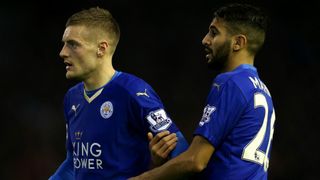 Stoke City manager Mark Hughes is wary of the threat Jamie Vardy and Riyad Mahrez still pose despite the duo's output drying up in recent weeks.

Vardy and Mahrez have 28 goals between them in the Premier League as Leicester City sit equal-top in the standings alongside Arsenal.

However, the duo have failed to find the back of the net in Leicester's last five league fixtures.

Hughes said there was always a danger the two would stop scoring, but knows their threat cannot be discounted when his side travel to King Power Stadium on Saturday.

"Realistically Vardy would come to a point where he would find it more difficult because opposition teams were going to legislate and make sure they weren't going to be exposed by his quality," the 51-year-old said.

"That's probably why he has found it more difficult of late, but that's not to underestimate the strength he poses, along with Mahrez. Both of them seem to have had remarkable seasons.

"There was always a danger they would stop scoring or the chances being created weren't as readily available and maybe their ability to win games would lessen. Is that happening at the moment?

"It seems to be but I've seen recent games and they look just as threatening as they have done throughout the year.

"At the moment they're on a run where positive results and three points are not forthcoming but I wouldn't suggest for one moment that they are on the wane, or on the slide. They've still got a real threat."