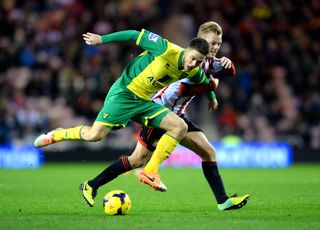 The Norwich City striker became the club's record signing in the close-season but has scored just once - in the 2-2 draw with Everton on the opening day of the Premier League campaign.

Part of the reason for the Dutchman's lack of goals return is because of a foot injury that has restricted his involvement to substitute appearances since October.

But he featured for the entirety of Norwich's 1-1 draw with Fulham in the FA Cup third round on Saturday, and came close to scoring when he forced a superb save from David Stockdale in the second half.

And manager Hughton feels that game time is vital for the former Sporting Lisbon man as he attempts to return to goalscoring ways.

"Ricky is someone used to scoring goals and that was an outstanding save (from Stockdale) because from the angle I was we thought it was in," Hughton said.

"It didn't happen for him in front of goal and maybe there were one or two occasions when he could have got across the keeper but it was really important for him to get 90 minutes under his belt.

"We know he has missed some three months, which is a fair time to be out and it is disappointing for him after such a good start with a fine goal on the first day."