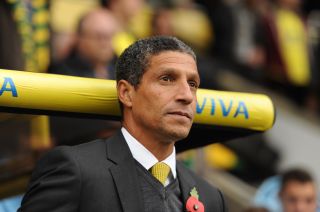 The Carrow Road club head to Old Trafford for the fourth-round clash on the back of a goalless home draw against Cardiff in the Premier League, and will be looking to deny United - who overcame Stoke City 3-2 on Saturday - their first back-to-back domestic home victories of the season.

But Hughton will opt against risking his first-choice XI, as has become the norm for many clubs in the competition.

"It's a game we're very much looking forward to, and one of course we're looking to win," he said.

"I'll be using the squad tomorrow night, but I'll be putting a team out that I think will be good enough to win a tough game.

"You always look for the positives, and one positive is that we did beat Manchester United last season (1-0 at home in November 2012)."

United made it to the fourth round of last year's tournament, while Norwich were eliminated by Aston Villa in the quarter-finals.