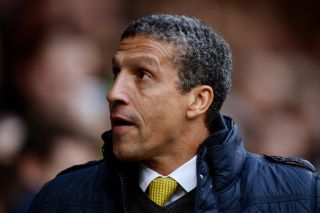 Norwich fell to a 2-1 home loss against Fulham in the Premier League despite taking an early lead through Gary Hooper.

This weekend brings an opportunity for City to gain a measure of revenge and Hughton is keen to do just that.

"We certainly want to be doing better results-wise than our Boxing Day result," he said.

"After having taken the lead and having a couple of good opportunities, it was a real disappointment to lose that game.

"This is an opportunity for us to make amends. It'll certainly be tough, our squad is going to be tested, there's no doubt about that.

"It's always about a result, this is a game we want to win and get through."

Hughton enjoyed some success in the FA Cup as a player, winning it twice with Tottenham, and he insists that it is still a prestigious competition.

"I was fortunate to be involved in Cup-winning teams a long time ago, certainly a lot longer than some of our younger supporters would know about, in 81 and 82," Hughton said.

"I think whichever year you look at, the Cup competition hasn't changed as regards the stature that it has worldwide. The approach to the Cup has changed of course over the years, as many aspects of the game have, but it's still a very special competition. I think it's still the best cup competition in the world."

The 55-year-old also confirmed that defender Michael Turner will undergo a scan on Thursday after he suffered a hamstring injury against Palace, while Ricky van Wolfswinkel will return after being left out for that match.