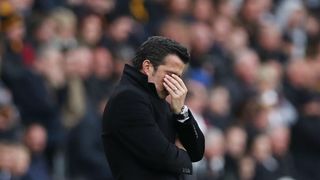 Though Sunderland's hopes of Premier League survival have evaporated, they had their say in the battle to beat the drop by securing a 2-0 win at Hull City on Saturday.

The Black Cats were relegated in defeat to Bournemouth last week, but they played with the renewed vigour often associated with teams put out of their misery as goals from Billy Jones and Jermain Defoe backed up Jordan Pickford's heroics to secure just a sixth win of the season for David Moyes' men.

Marco Silva had overseen six wins and a draw in seven matches at the KCOM Stadium as Tigers head coach, but the Portuguese's first home defeat since 2014 leaves Hull looking over their shoulder.

Kicking off before third-bottom Swansea City's fixture against Everton later in the day, Hull could have gone five points clear of the Welsh club, but a change in formation from Silva ultimately backfired.

Alfred N'Diaye wasted the hosts' most gilt-edged chance, while Pickford made superb stops to deny Sam Clucas, Lazar Markovic and Abel Hernandez. At the other end, Defoe wasted three excellent opportunities and passed 1000 minutes without a Premier League goal before a stoppage-time strike made the scoreline more emphatic for the Wearsiders.

1 - Hull are the only side to not score against Sunderland so far this season in the Premier League. Interlude.May 6, 2017

In an odd twist of fate, the Tigers will now hope Sunderland can continue their winning run when they host Swansea next weekend with Hull visiting fellow strugglers Crystal Palace.

Silva's attacking intentions were laid bare as Hernandez made his 100th City appearance alongside Oumar Niasse in attack, but the visitors had the better of a cagey opening and George Honeyman headed wide when his run into the box went unchecked.

Clucas drew a plunging save from Pickford after Hernandez nodded down Kamil Grosicki's cross and Harry Maguire lashed wide from 25 yards a minute later, but the hosts could not maintain momentum as Sunderland's extra man in midfield forced Hull wide, where Grosicki and Markovic were full of endeavour but lacking end product.

Hernandez produced a fine individual moment eight minutes from the break, drifting past two defenders from the right flank, but the Uruguayan's singular approach let City down as he ignored Grosicki and Clucas in the area before curling beyond the far post.

Second-half surges have become something of a hallmark for Silva's City at the KCOM and the game burst into life right after the restart as Eldin Jakupovic denied Defoe one-on-one before former Sunderland midfielder N'Diaye somehow scuffed wide from three yards out after more electric work down the left by Grosicki.

Defoe blasted another chance wide and Markovic's header was repelled by a flying Pickford before John O'Shea's brave block denied Hernandez as a breakneck contest rattled on.

And Hull's wasted chances came back to haunt them as slack marking allowed O'Shea's flick-on from a Honeyman corner to find a stooping Jones and he headed home the opener.

The hosts immediately drove at the Sunderland backline but Pickford made a stunning reflex save from Hernandez's near-post shot and, as desperation sapped Hull's composure in the closing stages, Defoe stole in to convert Sebastian Larsson's free-kick and shatter Silva's air of home-field invincibility.