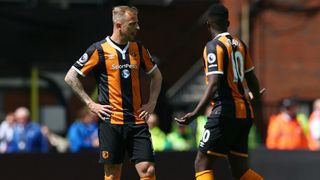 Hull City have been relegated from the Premier League as a result of their 4-0 defeat to Crystal Palace on Sunday.

Marco Silva's side are four points behind Swansea City in the table with just one game left to play, after they beat Sunderland 2-0 24 hours earlier.

They join Sunderland and Middlesbrough in dropping down to the Championship for the 2017-18 season.

Hull, who were promoted as play-off winners in 2016, were in the bottom three and had won only one of their previous 18 Premier League matches when Silva took over as manager from Mike Phelan in January.

He oversaw a 3-1 win over Bournemouth in his first league game in charge and took four points from consecutive matches against Manchester United and Liverpool.

However, a run of one victory in five prior to Sunday undid a lot of the encouraging work he had done, with the 2-0 home defeat to already-relegated Sunderland last Saturday a particular low point.