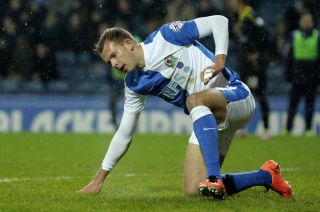 The Premier League club are seeking attacking reinforcements following Shane Long's departure for Southampton earlier this month, but Blackburn are determined to keep hold of their prized asset.

A statement from Rovers confirmed that two offers from Hull for the former Huddersfield Town man had been "respectfully and categorically rejected".

"The owners of Blackburn Rovers wish to reassure fans that their intention is not to sell Jordan Rhodes as they, along with the manager and board of directors, feel that he is integral to our bid to gain promotion back to the Premier League," the statement continued.

"Despite the necessity to comply with and address the pending restrictions of FFP [financial fair play] regulations, the owners feel it would be a detrimental step to lose our top goalscorer and such an icon of this football club.

"We made our intentions clear this summer when we rewarded Jordan with a new and improved contract and we stand by that.

"We want to give Gary Bowyer and the team the best possible opportunity to get back to the top flight and Jordan has been and remains a significant part of that aim."

Rhodes has been prolific in the second and third tiers of English football, scoring at least 20 goals in each of his last five seasons.

The 24-year-old, who signed a new five-year contract at Ewood Park in July, has also earned international honours, netting three goals in 11 games for Scotland.