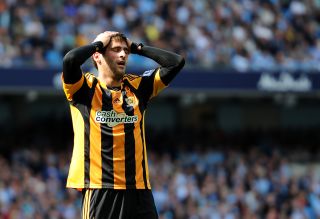 The striker - on loan from Sunderland - picked up the injury when he was on the receiving end of a Gareth Barry challenge in Saturday's 2-1 Premier League defeat to Everton at Goodison Park.

The club tweeted: "Danny Graham is set to be sidelined for around three weeks with the injury he suffered in Saturday’s game at Everton.

"Although scans have revealed the striker escaped serious injury following a first-half challenge by Gareth Barry, severe bone bruising around the knee will keep the on-loan Sunderland man out of action until next month."

Graham is yet to score in seven Premier League appearances for Steve Bruce's men.