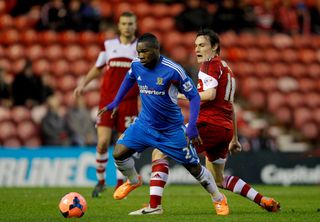 The 30-year-old, who scored 13 goals in 84 appearances for Hull and joins on a two-and-a-half-year deal, heads to Valley Parade as Bradford come to terms with the departure of prolific striker Nahki Wells to Huddersfield Town on Friday.

But manager Phil Parkinson expressed his delight at having acted swiftly to fill the void.

"I'm thrilled by the arrival of Aaron," he said. "He is someone I have monitored for a while now and he has a proven record at this level (with Peterborough United).

"Aaron is a fantastic player and he will be a great personality to have around the dressing room.

"I am sure he is going to be an excellent acquisition for the football club."

Hull added their best wishes in a statement, which read: "Everyone at the club would like to thank Aaron for his efforts during his time with Hull City and wish him all the very best for the future."

McLean, who made seven appearances on loan at Birmingham City earlier this season, will go straight into the Bradford squad for Saturday's League One encounter at Sheffield United, subject to obtaining the relevant clearances.