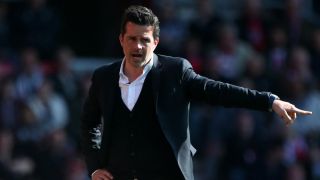 Marco Silva insists his focus remains on Hull City's fight for Premier League survival as speculation mounts over where he will be next season.

The Portuguese has revived the Tigers' fortunes since taking the helm in January, with the club securing 16 points from six home games under his guidance.

Hull face already relegated Sunderland – who they sat below when Silva arrived – at fortress KCOM on Saturday with a two-point lead over 18th-placed Swansea City.

Rumours that Silva is attracting attention from the club's top-flight rivals were brought to the 39-year-old's attention at his media conference on Thursday, but he was measured in his response.

"For me nothing's changed in my work. I will prepare my team," he said. "These questions with the coaches and the players is normal in football, but we never lose focus. All of us have one goal in our mind."

Sunderland have gone down without a fight this season as David Moyes' men have lurched from one defeat to the next, but Silva will not allow his team to take them lightly.

He added: "Every game is dangerous. We need to prepare well for the game and respect our opponents.

"What division Sunderland play in next season is not important. We will respect them, because it will be a really difficult game.

"It will be a big mistake if anyone thinks this will be an easy game for us. We will do our best to get the three points.

"Our home form gives confidence to our players, but this is a new game."