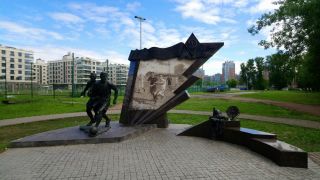 England will line up for a game no one involved in Gareth Southgate's camp ever wanted to play in on Saturday – the World Cup third place play-off, that empty space in which to mull broken dreams at a testimonial trudge.

But in some ways it is fitting that the Three Lions conclude their Russia 2018 campaign in St Petersburg.

The country's former Imperial capital was the birthplace of football in Russia more than a century-and-a-half ago, with British ex-patriots playing a key role in those formative years.

"At that time, in the 1860s, there were around 2,000 British people living in St Petersburg. They were the ones who brought football to Russia," football historian Yury Lukosyak explained to Omnisport.

"The first English sports clubs were formed in the 1860s. The first one was named Neva, the same as the river.

A short walk from our interview with Lukosyak at the Solo Sokos Hotel on Vasilyevsky Island lies the unassuming patch of grass recognised as Russia's first ever football pitch.

Maintained by St Petersburg University, the playing surface off Kadetskaya Liniya is marked out, has goalposts at either end and a pair of benches, even if the covering of daisies suggests a relaxed approach to grounds-keeping.

On Vasilievsky Island in Saint Petersburg, 400 metres from our hotel lies Russia’s first ever football pitch. Locals played their first ever game here in 1860. The first reported game happened in 1897... between Russia and England 7 July 2018

Initial games began here in 1860 but it was not until October 24, 1897 when the first match officially recognised by the Russian Football Federation took place.

A team of Englishmen, playing under the Vasilyevsky Island Club of Footballers' banner beat St Petersburg, comprised of Russians, 6-0.

"There was a little footnote in a newspaper article covering the game that said, with a little bit more training, Russia would be almost as good as the English," Lukosyak said. The unlikely positives supplied by Stanislav Cherchesov's team to the home nation are clearly nothing new.

Alongside the fresh innocence of these beginnings, football in St Petersburg is also associated with one of the darkest moments in Russian history.

Following their invasion of the Soviet Union in June 1941, Nazi troops reached Leningrad – St Petersburg's name at the time – by September of that year.

What followed was an 872-day blockade and scenes of unimaginable horror. In 1942, an estimated 650,000 Leningrad citizens died from starvation, disease and exposure in a bitterly cold Russian winter, as well as from injuries suffered during sustained German artillery bombardment.

Against this hellish backdrop, football became an unlikely vehicle of defiance and resistance.

Dinamo, the city's premier club before the rise of Zenit during the modern era, played on, contesting friendly matches despite their main stadium on Krestovsky Island – a few blocks away from the current World Cup stadium – being unusable due to heavy bombing.

At the humble, multi-purpose sporting complex that remains today – Omnisport took in a game of American football on our visit – a memorial stands to the match played between Dinamo and a Nevsky Zavod team whose core of Zenit footballers were bolstered by hockey players and athletes to make up an XI.

A quiet, poignant moment in our St Petersburg trip came when we visited the memorial to the Leningrad Siege match13 July 2018

Myth, blurred memories and wartime propaganda lead to conflicting reports of these times, but what is known is that Dinamo won the game in question 6-0 to mirror St Petersburg's first match before the turn of the century.

"These games were not talked about for more than 30 years and were only really mentioned for the first time around the Moscow Olympics," Lukosyak explained. "Back then it was decided it was important to spread the knowledge of football games taking place during that period of time."

The match was restricted to 30-minute halves as those involved struggled against the onset of starvation.

"I have talked to some of the people who were playing during the Leningrad Siege and they did not expect that those games would matter or be remembered," Lukosyak added, while explaining Dinamo were subsequently sent on a wartime tour of Russia to promote football, health and sports.

"At this point there are lots of legends about it and different retellings of the stories that have changed the facts. They did not know how important it was. They were just playing."

As Krestovsky Stadium beams its multicoloured space-aged light show one last time on Saturday and Dinamo begin their improbable new existence as PFC Sochi, those days of humble beginnings and heroic struggle will feel incredibly distant but should chime all the same.