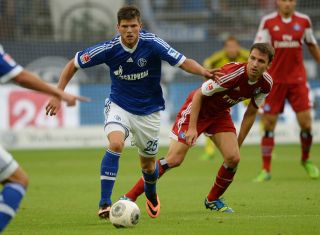 The Netherlands international has not featured for the club since August, having been dogged by cruciate ligament injuries for much of the current campaign.

However, the 30-year-old is primed to return to full training with the club ahead of their first fixture of 2014 - a trip to Hamburg on January 26.

"My longest preseason ever had finished," Huntelaar said on Twitter.

Jens Keller's side have been hit hard by injuries so far this season, with defender Kyriakos Papadopoulos and midfielder Marco Hoger among those to have have joined Huntelaar on the sidelines.

Captain Benedikt Howedes also missed much of December with a thigh injury but he feels the recovery of Papadopoulos and Huntelaar are promising for Schalke.

In terms of his own recovery, though, the defender wants to take his time before returning to action.

"I'm delighted we can count on those guys (Papadopoulos and Huntelaar) again," he said.

"It'd be great if I could come back against Hamburg but I shouldn't rush things.

"It's difficult to say when I'll be back, in fact, as I've only done light training so far, without any sprints or tackles."