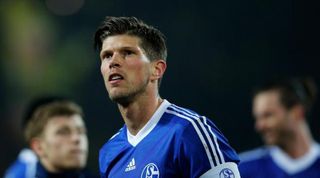 Huntelaar and his team-mates have won just one of their past four Bundesliga matches with their disappointing run having continued on Sunday when they crashed to a 1-0 loss at home to rivals Borussia Monchengladbach.

But only four points separate Schalke (58), Leverkusen (55) and Wolfsburg (54), while Monchengladbach (52) are two points further back in sixth position.

Despite going off the boil in recent weeks, Huntelaar is adamant Schalke will secure their place in the group stages of the Champions League.

"I'm not worried and I can say that for sure," the Dutch international said.

"We've got two games now to secure third place in the table and I'm totally convinced that we'll do it."

Hunterlaar added: "We've got to turn the corner and it's up to us to do that. We've got our destiny in our own hands.

"We've got three and six points on Leverkusen and Gladbach and it's up to us to use that advantage to end the season in third."

With Hunterlaar stressing the importance of 'turning the corner', Schalke must return to form against an in-form Freiburg that have only lost one of their past eight league fixtures.

"The best thing we can do now is win in Freiburg on Saturday, and then the pressure will not be so great and things would start looking really good for us," he said.

Schalke will take confidence from the fact that they have won their last two meetings with Freiburg.