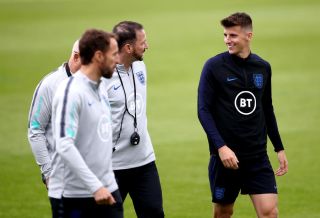 Sir Geoff Hurst feels England’s tremendous journey under Gareth Southgate has proved reward for the manager’s faith in young players who had “hardly kicked a ball” in the Premier League.

The Three Lions continued progress from reaching the World Cup semi-finals by finishing third in the inaugural Nations League during the summer.

England will resume their Euro 2020 qualifying campaign out to extend a 100 per cent start with fixtures against Bulgaria at Wembley and then Kosovo in Southampton.

Southgate has again given youth a chance in his latest squad.

Uncapped Manchester United defender Aaron Wan-Bissaka, meanwhile, was forced out by a back problem.

World Cup winner Hurst believes Southgate’s focus on potential – despite some players not being tried and tested in regular Premier League action – has been justified by results.

“In our time, you would have had to come through the club system and play maybe two or three years, perhaps longer as I did, to get recognised for the national team,” Hurst told the PA news agency.

“I was a good example of that. I was scoring goals for a club that was successful, with West Ham winning the FA Cup and European Cup Winners’ Cup, yet I didn’t get picked for England for probably three years.

“Today, of course, we are picking players for England who have hardly kicked a ball – and I think he (Southgate) has had to do that because there is less of a pool to pick from.

“But he has shown he can do that and be successful, by bringing forward these young players, unusually, who have hardly kicked a ball playing in the Premier League on a regular basis.

“In many respects, that is quite a remarkable achievement.”

“Since the World Cup, England have continued progressing and the Nations League was very good,” said Hurst, an ambassador for Alzheimer’s Society Memory Walk campaign.

“It has been a tremendous journey in a fairly short time under Gareth Southgate and his staff.

“It is quite clear the management of the national side is absolutely vitally important – and we certainly had good management during our time in 1966.

“The players are all talking (together), you can see the relationship and the guys talking about how they feel playing for England.

“It is quite clear there is a very good sense of teamwork and camaraderie going on, which in many respects had been a key issue at our time and still is today.”

Our first flagship #MemoryWalk kicks off today and we are so excited! Thank you to everyone involved and we hope you have a magical day.— Alzheimer's Society (@alzheimerssoc) September 1, 2019

Hurst hopes his continued work with the Alzheimer’s Society can help raise awareness and fund vital research against dementia, which has afflicted some of his former England team-mates.

“A number of my World Cup colleagues from 1966 are suffering from this dreaded disease, Martin Peters currently and also Nobby Stiles, while Ray Wilson, who was diagnosed with it, passed away some time ago,” said Hurst, who will be part of the Cheltenham Memory Walk at Pittville Park on October 13.

“Gordon Banks did not suffer, but worked very hard for the society for a number of years, so it is very easy for me to be motivated to be an ambassador to create awareness.”

Hurst added: “It is not the person who has it, they are not aware, it is the people that are living with it and supporting the person they love, or grew up with and admire. It is simply awful.”