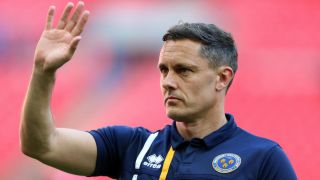 Ipswich Town have announced the appointment of Paul Hurst as their new manager.

The Championship club have agreed a three-year contract with the 43-year-old, who has spent the last two years at Shrewsbury Town.

"I am hugely excited that Ipswich is providing an opportunity for a young, up-and-coming manager to prove himself in one of the world's toughest leagues and in time hopefully the highest league level in world football," he told the club's website.

"I am sure all of our supporters will get behind Paul and like me can't wait for the new season to get started."

Hurst guided Shrewsbury to the League One play-off final this season, where they were beaten 2-1 by Rotherham United after extra-time.

He admitted the offer from Ipswich was "too good to turn down" and hopes to play an important part in their bid for a return to the Premier League.

"Ipswich are a big football club when you think of the stature and history it has in the game," he said.

"The club has a great reputation and always looks to be well-run and I'm delighted to now be part of Ipswich Town, with an opportunity to make our own history."

"I’ve got to assess the squad and see where we can add to it and then look to move us forward and help get us to where we all want to be - the promised land."Read what Paul Hurst had to say after becoming 's new manager...  May 30, 2018