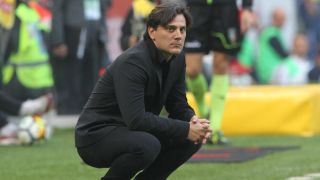 Under-fire AC Milan head coach Vincenzo Montella is convinced he retains the support of the club's hierarchy ahead of Sunday's trip to Sassuolo.

Milan invested heavily in overhauling their squad during the close season but lie eighth in the table, having won only one of their past six Serie A games.

Thursday's listless goalless draw at AEK Athens in the Europa League also did Montella few favours and Gazzetta dello Sport reported on Saturday that anything other than a win at Sassuolo would bring about the end of his San Siro reign.

"The players are eager to work to improve. The club management has always backed me," he said.

"Sassuolo didn't start off on the right foot this season but they are improving. In our attitude will make the difference"November 4, 2017

"This team has great potential. In Athens, we didn't play a good first half. We need to improve as a group also tactically.

"I am focused only on the match. I am not thinking about the future. I am convinced I can lead this team.

"I am not tired of the rumours, I am a fighter and focus only on Milan. I know full well there are peaks and troughs in football. It's part of football and I know perfectly well how things go.

"The numbers are not right but I think we can start our climb to fourth place with a nice victory."

Montella even found time to poke fun at Gazzetta's mocked up image of his former team-mate and current Milan youth team coach Gennaro Gattuso that suggested the ex-Italy midfielder is ready to take his place in the dugout.

"If you use photoshop to take pounds off others, do it to me," he added. "Gattuso seemed a bit too thin and even taller.