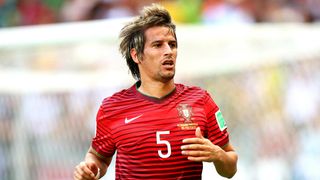 Fabio Coentrao acknowledges he has not been able to play at the required level to feature for Real Madrid as he considers leaving Santiago Bernabeu.

Since arriving as a promising prospect in 2011, Coentrao has fallen out of favour under a number of Madrid coaches, making just one substitute appearance in LaLiga this season amid fitness concerns.

The Portugal international is now willing to face up to the fact that he may have to look elsewhere to rediscover his form, with a move at the end of the campaign mooted.

"I'm in no condition to play for Real Madrid," Coentrao told Marca. "I want to return to my best next season.

"I have a contract with Real Madrid until 2019, so if they continue to count on me, perfect – if not I'll choose my own path.

"Maybe returning to Portugal would help me recover the level of play I once had. We should all admit our limitations at some point in our lives and I feel that, right now, this club demands a level of play I'm not at."

However, Coentrao is determined this will not be the end of his career among the elite, with the 29-year-old insisting he can return to the top.

"I hope to play three or four more years at the highest level," he added. "I know I can do it."