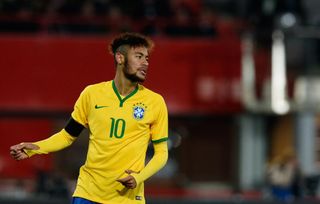 Controversy has surrounded coach Dunga's decision to strip Silva of the captaincy and have Neymar leading his team.

As he was being substituted late in Brazil's 2-1 win over Austria in Vienna on Tuesday, Neymar handed the armband to Silva.

The Barcelona star said: "I didn't think about who I would give the captain's armband.

"I decided in the moment like everybody does. Sometimes that choice is luck, sometimes by the leadership on the field and this time I chose Thiago Silva.

"It was not about what happened. It's because he was wearing the captain's armband before, he's a leader in the field and that's important to us. That's why I chose him."

Roberto Firmino scored the winner for Brazil in the 83rd minute after Aleksandar Dragovic's penalty cancelled out David Luiz's opener.

Neymar said he was delighted for the 23-year-old Hoffenheim midfielder.

"It's great because Roberto Firmino's confidence grows up with this result," he said.

"He deserves it for what he's been doing in the training sessions, for his dedication. I congratulate him. He played a great match and helped us with this victory.

"It's really important to start like that in the Brazilian team, it's only his second match and he scored. That gives you a big satisfaction, playing for your country and scoring a goal."