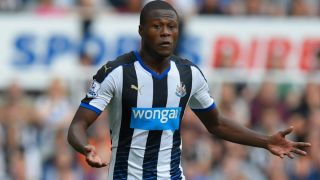 Chancel Mbemba labelled Newcastle United's season a "failure" and said he did not expect a relegation battle when he joined the club.

Newcastle sit in the relegation zone after 20 games and face a difficult battle against Manchester United on Tuesday.

The clash comes just days after Newcastle were knocked out of the third round of the FA Cup by Watford - the fourth year in a row they have stumbled at the first hurdle of the competition.

Mbemba, a €12 million signing from Anderlecht in the off-season, was expecting to be fighting for a top-10 finish rather than Premier League survival with Newcastle.

"At the beginning of the season I did not expect the team to be in this position," he told The Mirror.

"I don’t think any of the new players expected to be where we are.

"We had ambitions to be up in the top 10 at least but this season has been a failure right from the very start."

The 21-year-old says the player's must take responsibility for the poor form but could not guarantee safety.

"The players are the ones who go onto the pitch and perform. It is not the head coach or the fans who go out and play, it is us," he continued.

"We have to take all the responsibility. We have to give 100 per cent to make sure we turn this around.

"I cannot predict the future. What I can promise is that we are doing everything to get out of this position.

"We need to continue to work hard, together, to get results and make the fans happy. We have to keep motivation high and work hard."